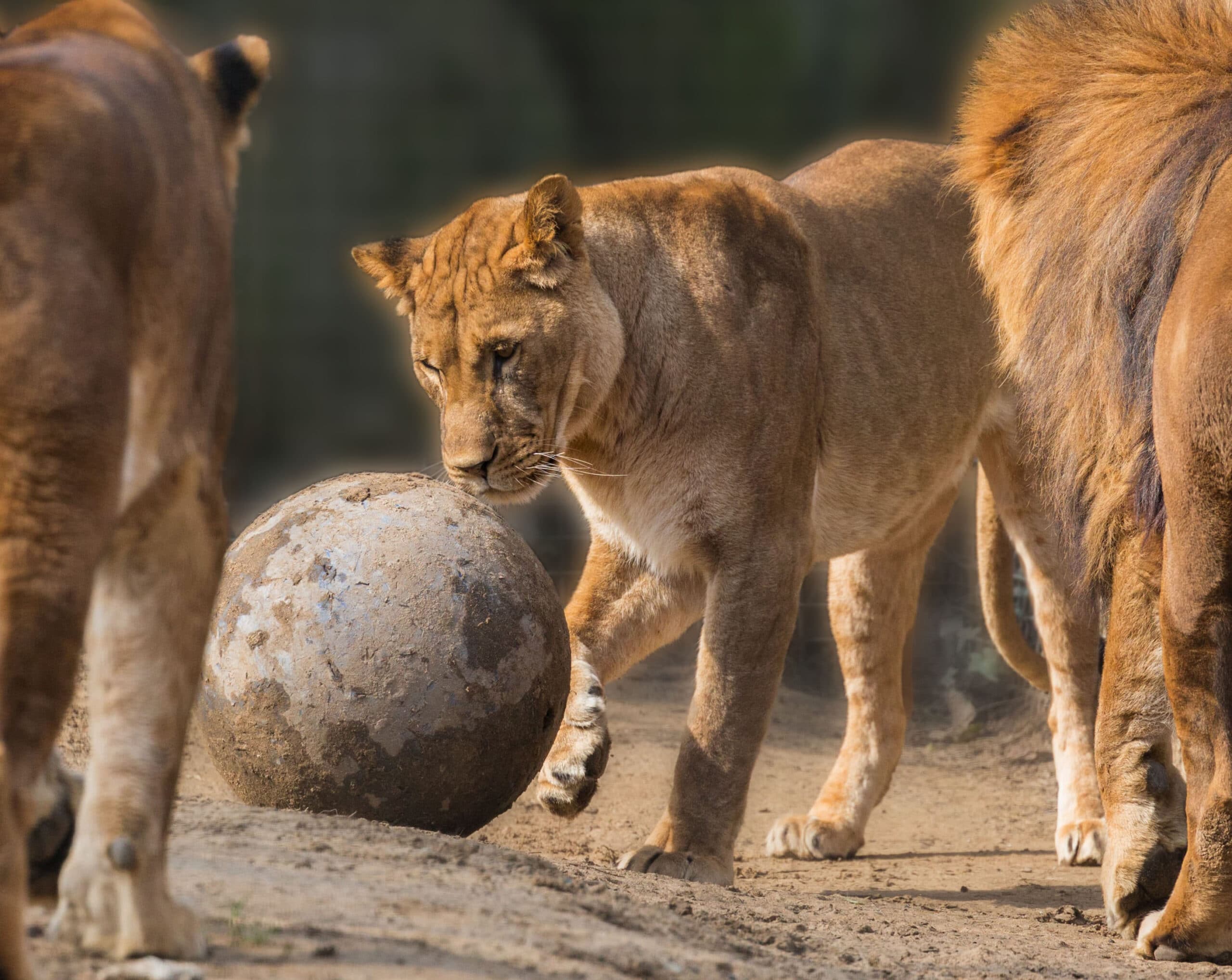 If you’ve visited the zoo before, you may well have seen that their 3 lions; Boss, Semira and Amahle love playing with an enrichment ball, which to us would be the same as a friendly game of football. Since they arrived at the zoo back in 2015 keepers have noticed their ball kicking skills have improved, so they’ve made the decision to enter them into the England Animal Football Team.

The England Animal Football Team includes several zoo collections who have put forward their best ‘playing’ animals to be a part of this prestigious team. Each week the animals are monitored in terms of goals they score, their pass technique and total time they play for. All of this information then gets recorded and submitted to the England Animal Football Team’s Manager to produce one final score. This score is then submitted to the World Cup of Zoological Collections where a winner will be crowned once the season is over.

Senior Carnivore Keeper Mike Downman said: “Boss, Semira and Amahle have been doing incredibly well practicing so far. However they still need a bit more training to compete in the tournament, so we’ve actually contacted Lionel Messi, in the hope that he can give us some tips and tricks to help improve their skills, or better yet, support the England Animal Football Team on their mission to win.”

Newquay Zoo would like to encourage their visitors to also support their team and wish Boss, Semira and Amahle, the best of luck with their mission to win the World Cup of Zoological Collections. Let’s hope it’s a double win for both England football teams in their tournaments this year.

Capuchin monkey born at the zoo!

Newquay Zoo has recently celebrated the birth of a white-throated capuchin; a primate native to…

This website uses cookies to improve your experience while you navigate through the website. Out of these, the cookies that are categorized as necessary are stored on your browser as they are essential for the working of basic functionalities of the website. We also use third-party cookies that help us analyze and understand how you use this website. These cookies will be stored in your browser only with your consent. You also have the option to opt-out of these cookies. But opting out of some of these cookies may affect your browsing experience.
Necessary Always Enabled
Necessary cookies are absolutely essential for the website to function properly. These cookies ensure basic functionalities and security features of the website, anonymously.
Functional
Functional cookies help to perform certain functionalities like sharing the content of the website on social media platforms, collect feedbacks, and other third-party features.
Performance
Performance cookies are used to understand and analyze the key performance indexes of the website which helps in delivering a better user experience for the visitors.
Analytics
Analytical cookies are used to understand how visitors interact with the website. These cookies help provide information on metrics the number of visitors, bounce rate, traffic source, etc.
Advertisement
Advertisement cookies are used to provide visitors with relevant ads and marketing campaigns. These cookies track visitors across websites and collect information to provide customized ads.
Others
Other uncategorized cookies are those that are being analyzed and have not been classified into a category as yet.
SAVE & ACCEPT